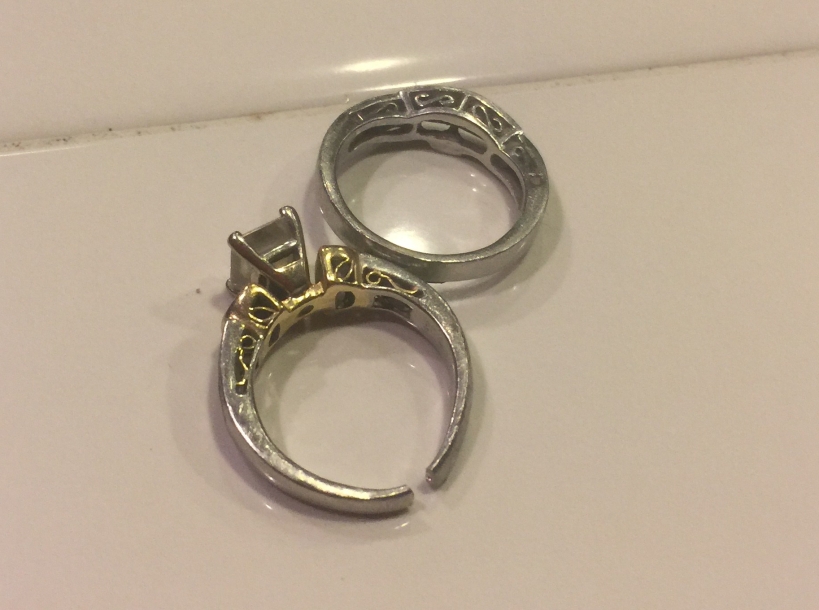 I had been noticing that a line was forming on the back of my wedding ring but honestly, we’re pastors and the Christmas season is busy. I mean seriously, it has to wait because what pastor is working anywhere else but church during the second most important day of the year?

It began snagging things right after Christmas. Honestly, how does this happen? Sheesh! I’ll have to stop and take it to the shop, next week maybe. UGH what an inconvenience.

On New Year’s Day during our New Year’s Dinner it broke entirely. The weld came loose and my engagement ring and my wedding ring came apart. Not slowly either, just poof it was broken.

BAM! Then it hit me looking at my wedding ring on the kitchen counter that marriage is like that. The signs of trouble come up at the most inopportune times. We ignore them because we think there is a bigger picture and it will hang on, and vows, and forever, and all that.  After all, our marriage, like our ring is platinum, it’s not white gold. Platinum is 95% pure while white gold is 58% pure. We’re good, we’re in it for the long haul. These problems will wait until we have time to fix them.  So we keep going on with life as if there isn’t a problem brewing.

Things begin to hit a snag. An argument here, a passive aggressive action there, and we think we’ll get through it as we keep moving forward in other areas. We’re a team, teams have ups and downs.

Thankfully for me, it was only my rings that are broken. My husband I work on diligently on our marriage because we know how important it is. We will alert each other to signs as they come up and we will take the time to fix any cracks as they arise. We aren’t perfect but we keep a line of communication open to one another and we examine ourselves regularly. We haven’t been opposed to getting professional help when needed either in the early years of blending our family. As my husband loves to tell people, “We’re in this for life. No one is leaving this marriage except in a box. Hmm I wonder if this is why sometimes I wake up with a pillow over my head?”

Yes, I married the comedian.