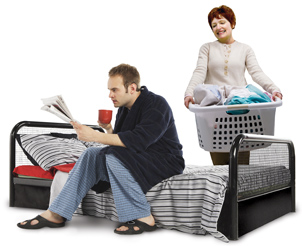 Think of the now ubiquitous “failure to launch” syndrome of those twenty- or thirty-somethings still living with their parents. They cannot end childhood and fully enter adulthood. But the bigger issue is often the parents’ inability to end the pattern and stop the toxic dependency by pushing the grown “kid” out of the nest. They refuse to end their “helping” role, which is not in fact helping.

Cloud, Henry (2011-01-18). Necessary Endings: The Employees, Businesses, and Relationships That All of Us Have to Give Up in Order to Move Forward (p. 11). HarperCollins. Kindle Edition.

The book Necessary Endings will clarify things for you. I read it at a moment of desperation and eliminated and limited detrimental things in my life, even clutter both physical and mental because the wisdom penetrated that deeply. However, this thought made me stop reading for over 24 hours as I processed the concept and tried to figure out the why.

There is an idolatry of ourselves going on these days and it manifests in the control of our children. We have determined that our child is the smartest, brightest, most likely to succeed (even if I have to do it for you), brilliant, talented, moral, beautiful, and end all to all humanity. Cancer has not been remedied, nor wars ended simply because our child has not reached that age of maturity YET. But fear not world! Our child will git-ur-dun. Oh, and by the way, if you don’t like my child? Well, you’re just a hater who wishes your child was as good as mine.

Sometimes I wonder if I’m the only woman on the planet who thinks her children are smart and they are one of many smart children, but my measure is are they good kids? I think my kids are good looking but so are so many other people but are their hearts right with God?  I love my kids but life is life, consequences are consequences and  I knew one day I would push them out of the nest so that they can either fly, or fall to the ground. So far my stats are decent. Two have launched willingly, two have been launched, all have flown. Only, the verdict isn’t in yet because I hear sometimes they boomerang.

We could just chalk this failure to launch thing to the economy, to immaturity, to a variety of factors but the statistics are that suicides and homicides are climbing, depression, anxiety, sleep disorders, drug usage, and STD’s are at an all time high among our kids. Something is wrong. What is it?

Could it be that in this consumer driven, all about me culture that we live in we fear that our children’s failure reflects on us?

Therefore, propping them up in whatever capacity we can alleviates the self-inflicted embarrassment that is thrust on us. We have to have the best kid  and provide the best privilege because we are the best parents.

If you think I’m wrong watch how it plays out. I’ve seen parents of adult children throw their grandchildren on the altar of their ego manifested in their child. We all watched it play out with the Casey Anthony case. We aren’t doing it for the child’s sake. We’re doing it for ourselves. We have created an image of ourselves and the statues that we worship resemble the faces of our children because they look like ours. None of us have to watch TV to see how this plays out. We need only to look in our own homes and those of our community to see the reality.