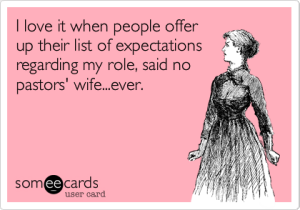 The Church often thinks when they select the man to shepherd their church they get his wife for free. During the interview process they interview the Pastor’s wife. I don’t see this done in any other career field and I’m mixed on it. I see the reasoning, I mean she’s hopefully going to be visiting his work often. If she is crispy fried over ministry issues it will play out in the role her husband plays in the ministry, there is nothing like the bitter Pastor’s wife who looks at life through the eyes of suspicion, because she will manifest her own betrayal. If she is helpful then the church has gained a saint but that doesn’t mean they’ve gained ministry help.

There is this thing that the church seems to miss and it’s a big thing.

Has she been called to ministry? Her husband’s call isn’t hers. One would argue that if she is saved and converted then she is called to win the lost, and it is right to think so, but being a disciple of Jesus and called to ministry are two different things. Calling comes with its own special set of parameters that the rest of the elect, that’s bible speak for those called to salvation, aren’t expected to live up to in the same way. I have met the Pastor’s wife who is the worship leader and awesome at it. I have met the Pastor’s wife who attends a different church and is lovely. I have met the Pastor’s wife who is raising little ones and is blessed to get to church with only one of her little children missing a shoe and she’s loving. Calling is a distinct thing and sometimes it’s seasonal too. Often I hear the cry from the church leaders who say she knew the expectation when she married a pastor (insert my jaw dropping here). What about the Pastor’s wife who met and married the business man who later became a Pastor? Did she sign up to lead a church or did she sign up to minister to her husband?

Let’s as people of God in the community of faith take a step back and cut the Pastor’s Wife some slack. Let’s quit being so quick to judge her ability to lead the Children’s Ministry and allow her to serve where she feels God is calling her to serve. Let’s quit looking for her to have an opinion on the direction of the annual Ladies Tea and see if she is even remotely interested in speaking to the group. She isn’t called to make decisions in her husband’s department of ministry yet so often we throw her in there and ask for her opinion and then criticize that opinion. She is the woman God has called as the partner to her husband. She hasn’t necessarily been called to ministry and maybe, just maybe, the horror stories of the horrible pastor’s wife is because she is in a role not suited to her gifting. Maybe she is bowing to the pleasure of man and isn’t called by God.

Maybe just maybe she is controlling and doesn’t fit the role. Maybe she has an opinion that doesn’t fit the vision of the church. Maybe she does feel the need to be “in” on every aspect of her husband’s ministry. Can we agree that it is  her husband’s to deal with, and the leadership of the church to deal with, and we, as the church, are simply called to pray?  Because if that isn’t the case then we are no better.

2 thoughts on “The Pastor’s Wife’s Calling”