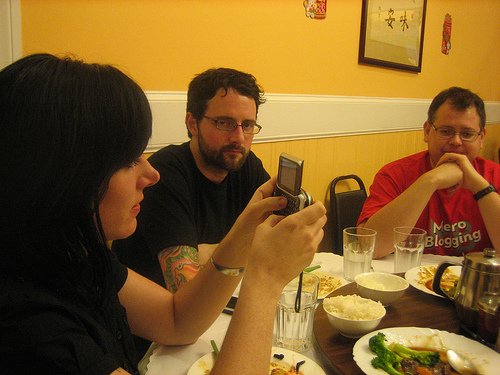 Ephesians 4:29 Watch the way you talk. Let nothing foul or dirty come out of your mouth. Say only what helps, each word a gift. ~ The Message

I am a people watcher. One particular day Doug and I had decided to get Indian Food at a line-out-the-door-hole-in-the-wall, that has some good grub. We had a good 20 minute or more wait, so I watched the couple in front of us. She kept trying to talk to him, he kept reading his phone and answering in one or two words. Technology etiquette blog on the way. There were two girls from work discussing work it seemed, there were people quietly walking through the line. As we moved closer to the front, I began to look for a table. There were three women and two men, laughing hysterically and enjoying their lunch. What fun to have lunch with friends, I thought! One woman was a loud-mouth and chewed with her mouth open. Another etiquette blog. I watched her in what seemed like slow motion poking her fork into her curry chicken and then chewing with her mouth open as she talked to everyone. I wondered how much food was being sprayed into the others plates. She chews like a cow, I thought to myself.

We ordered and found a table to sit down at. As we waited patiently for our food to arrive, I noticed that many of the couples there were reading their phones and not interacting. Ourselves included. Okay, I thought, we really have to get back to the basics. Where’s the conversation here? I mean this has the potential of being a really good date for the two of us.

Ohoh! Landmine at the table with the three women and two men. Loudmouth girl says loudly, “That stupid f*^@&*# b%#@%. I asked her if something was up between us and she said no.” So the women begin to dish on whoever they were talking about. I quit looking at them because they were quite engrossed in their conversation. One of the men sat back in his chair and crossed his arms. The other man put his hand to his mouth. They looked uncomfortable. They looked away. They looked down at their food. Then the one man, with his hand to his mouth, engaged the other man in a conversation of some sort, and they both even positioned themselves and moved their seats slightly apart from the women. Now instead of five people talking at a table, there were two sets of conversations going. Displeasing conversation had broken up the camaraderie.

I looked around the room and realized we were unaware of each other, even when we’d opted to dine together. People were busy on their cell phones, others were merely eating, still others were having separate conversations unaware that others were uncomfortable. I looked over at the couple who had been in front of us in the line. She was sitting quietly annoyed and he was still on his phone. We were still on our phones, as Doug began to tell me about what he’d learned about beer on the History Channel. I crinkled my nose and said, “Beer is gross.”

It begs the question are we engaging each other in real conversations? Conversations that matter? The gossip at table of five separated out lunch buddies, the cell phones separated out many. Wait! I look over in the corner of the room. There are three old guys with long hair. Hippee-types from another time. They were eating Tandoori salads, leaning back in their chairs, in friendly discussion. No phones, no women! I couldn’t hear what they were saying. Maybe their free love talks of days gone by, have given way to political discussions about Wall Street? I don’t know, but it made me wonder if we’ve lost the art of conversation?

2 thoughts on “The Art of Conversation”