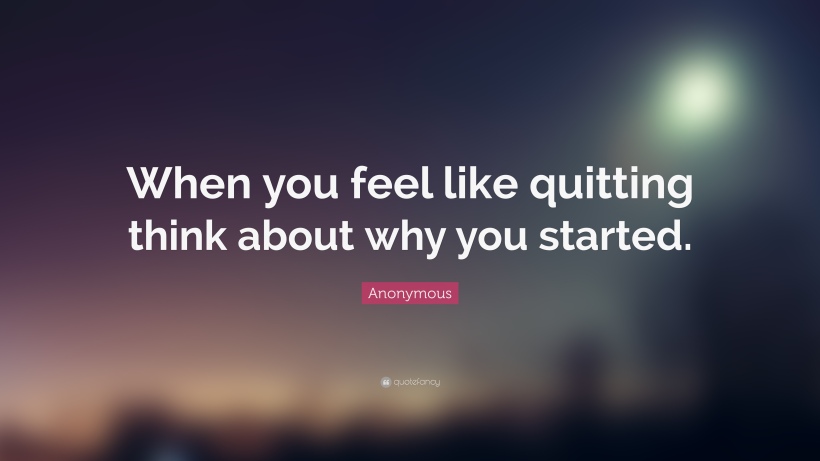 Galatians 6:9 And let us not grow weary of doing good, for in due season we will reap, if we do not give up.

I was feeling very discouraged and weary over the past few weeks. In ministry there are lots of critics and you have to keep a good handle on your heart but sometimes your hand slips and your heart gets a little tainted with the mess of another. The best thing to do is to take a step back, cleanse, pray, and get back in the game but sometimes when it happens over and over, the shock of seeing mud again from the same source on your heart makes you sigh deeply and think about the ease of quitting and not moving towards cleansing.

I was met with a naysayer to ministry. “You’re not doing it right. If you were doing it right, you’d do it like I do.” On the left hand, “We love you and we love what you are doing.” On the right hand, “You’re wrong and it’s incredible that you have been able to get this far.” I knew intellectually this was a manifestation of a heart awry BUT, AND THIS IS A BIG LESSON, sometimes, you override what you know to be true for a false thing if you aren’t careful.

I remember in one of my psychology classes Dr. Johns said, “If I tell you every single day that the sky is green and that you have believed a lie and that you are naive in ever believing it was blue, you’ll eventually question yourself.”

I did you guys! I questioned the color of the sky. Never mind that my ministry spoke for itself and had its own measure of success.

I questioned the color of the sky in a question, “What am I not giving the naysayer? Why do they have the need to issue a beat down? Is our ministry clueless and heading down the wrong direction?” The Holy Spirit swept in and let me see that the complaining had absolutely nothing to do with me but by then I had allowed myself to get weary. It had been months of public criticism. The problem with thinking of quitting ministry is that ministry isn’t a career, it’s a calling and if you begin to think it’s a career you’ll shop it around and miss the calling of where God called you to be.

We’ve heard it said that the average pastor who leaves the ministry leaves due to the words and actions of eight people. Eight. People in ministry, like us, choose every day to get in the truck and leave their calling behind because they let an average of eight people steal their joy and steal their calling. ~ Leading and Loving It

Folks sadly, I was below average in letting one person’s rant get the best of me. That’s what weariness does.

We must show mercy and yet stand firm and the only way to do that is knowing who you are. Good thing I had done the work for that long before this moment.

Anne Lamott says mercy is tough. In her book Hallelujah Anyhow she writes:

Mother Theresa cradling strangers at dawn is very romantic, but in life, there is also your thirsty bigoted father, your lying sister, the whole human race, living and dying and rising with Christ.

Don’t quit. There is a harvest at the end of it all if you don’t quit.

Have you ever felt like quitting? Sometimes it is warranted but most times it delays the prize. Don’t let your feelings get in the way of what God has called you to do. Seek God. He will lead you through.