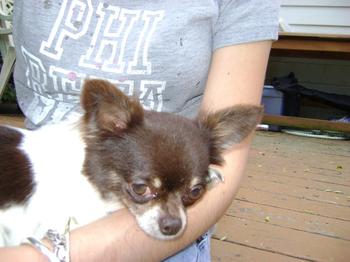 Tish had been talking about getting a small dog for years. She wanted one who would fit easily into her lap when she got home from work. A small dog would be easy to walk. She poured over pictures and facts of small dogs and went to work on finding one. She determined that she didn’t need the dog to be any particular breed so she drove down to her local animal shelter.

She could hear the dogs barking as she pulled up the dusty driveway to the shelter door and she began to feel anxious with anticipation. Tish took a deep breath swallowed hard and began her search. The first section of the shelter were small kennels three high with cats. Knowing that she didn’t want a cat, she moved past that section to the second section where the dogs were.

Tish peered into each kennel. Some of the dogs were sitting quietly staring back at her, others were lying down and wouldn’t look her in the eye and still others were barking and moving frantically trying to get her attention. Nearing the last of the dog kennels she hadn’t seen a small dog yet. They were all medium to large dogs and not what she was looking for. Sighing she took a look in the last kennel of the shelter and there stood a porcupine. She laughed out loud at the thought of a porcupine locked in a kennel at the animal shelter.

She walked over to one of the volunteers and asked where they kept the small dogs. The volunteer told her that right now they didn’t have any small dogs but if she kept checking back they were bound to get one as they came in regularly. She was a little disappointed but she was determined to find her little dog.

For a week, she’d drive down to the shelter each day on her lunch break. Each day, new dogs arrived, and each time they did, they were too big. She’d walk the length of the kennels and at the end of the kennel she’d once again see the porcupine.

She began to notice that the porcupine had soft hair but it was intermingled with with sharp quills that lied flat on its back, sides, and tail. She smiled to herself as she thought this porcupine was actually quite cute. Once again she left without her small dog.

The next day, she returned to the shelter and once again there were no small dogs. Feeling a little desperate and tired of searching, she decided to bring home the porcupine. She stopped at the local feed store and discovered that porcupines eat tree bark and leaves and so she went about building a habitat for her porcupine. She tried a few times to pet the porcupine but each time she did a quill would get stuck in her skin and she wasn’t able to get it out without a great amount of pain and help from others.

Still she persevered trying to make this porcupine into the small dog she wanted. She tried to put it on a leash, she tried to put it in her lap and each time she was stuck by a quill. Tish realized too late that she had made a mistake but she had invested so much time and money.

You might think Tish is stupid in her choice and that you would never make that mistake. Only let’s be real we all make that mistake when people tell us who they are and we choose not to believe them and try to mold them into what we want them to be instead of waiting to get the real deal.

How many women do we know that are sitting on the couch across from a porcupine when in their dreams they wanted a lap dog? All because they couldn’t wait for potential to manifest itself.

*Adapted from a quote on the Dr. Laura show.

TLC4Women is getting ready to start its new year. It’s a special year for us since it’s our Seventh! I can’t tell you how excited I am to be with this group of women and the new ones they will bring to the class.

When TLC first started we started because we wanted a different kind of bible study. One that would bless us as women, teach us the word, and give practical tips to applying principles to our lives to make it better. I wanted a group with a promise. One that said, if you’ll come and study, your life will change. The banner over our ministry was “be transformed by the renewing of your mind” Romans 12:2 so Transforming Life Center was birthed.

On Monday we will all gather to worship, to pray, to set the pace for how walking this life out will look like in the 2013-2014 season. We plan on tackling three big areas this year.

1. What are the weapons of our warfare as women and daughters of the Most High King? Prayer, praise, tenacity, and a strong love of God and his Word.

3. Who is the Holy Spirit and how do we keep him at the forefront guarding our steps and making sure we don’t break our ankles?

Prayer, Disciples, Praise, all led by the Holy Spirit and that would be a great year but we have to more to learn. Then we’re going to study the Prophet Malachi. Word for word, verse by verse. Who was he and what can he teach us?

It’s going to be a great year and I can’t wait! See you all on Monday at 7.

Over three billion people — more than half the world population as of 2010 — live on less than $2.50 US Dollars (USD) a day. More than 80% of the population lives on less than $10 USD per day. To put that in perspective, the average American spends about $7 USD a day on entertainment alone, and more than twice that on transportation.~visualeconomics.com

I’ve had workmen in my home for two weeks now. My kitchen is completely torn down. Did you ever realize how much gunk goes down the side of your stove? Okay, it’s not really the topic today but I’ll post about that later.

Back to the thought process. Each morning on my way to work I walk downstairs and say good morning to the workers. This particular morning Doug had left earlier than I had and he asked how he could bless me. I replied that he could get back before I left for work and bring me a Starbucks. Actually what I said was, “I’ll love you forever if you bring me a tea from Starbucks before I leave.” Well he did. I kiss him goodbye and I walk downstairs that morning with a purse, a computer, and a Starbucks in my hand.

“Good Morning!”, I call out. One of the workmen said, “You’re always so happy Pastora. Every time I see you, you’re always in a good mood.” I really was in a great mood, because how could I not be, and I said, “What’s not to be happy about? We are blessed.” We said our goodbyes and I left.

I put my computer bag in the back seat of my car, put my purse in the passenger seat and was about to put my Starbucks in the cup holder and I paused.

“What’s not to be happy about? We are blessed.”

I spent more on tea in one morning before 9 am than half the world makes in a day and a half. What do I have to complain about?

Do you ever just put your life in perspective? It’s hard to be depressed when you view your life through the lens of the average world citizen. Watching Storage Wars on television I saw where we have enough storage units in the USA to house every single person on the planet. Do you realize our storage units house our leftovers? Yes, we’re in a recession and things are looking bleak but when we look at it from a lens of gratitude we are abundantly blessed.

No matter your circumstances today, take a little time to count your blessings. You’re probably reading this blog post on a Internet connection that is costing about $1.00 a day. Would you have Internet if it costs half a day’s wage? Face it, we have it pretty sweet.